Today was our first Drifting Pretty kick-off meeting that took place at K1 Speed. We started our meeting with a surprise for Nadine and Benson for their 4th baby that’s on the way. One thing to remember when buying a baby shower gift is – you can never go wrong with giving diapers because those are the essentials. The kick-off meeting usually covers the events that are set up for the rest of the year. This year we’re having different people blog about their experiences. What a cool way to help each other relate to what others are thinking and feeling.  How exciting, people!

Before we could finish the meeting, our names were called to race. We got up to the check-in area and I remembered why I like K1 so much – because they give you nice head socks, haha! At K1, you look like a ninja in your head sock because it covers everything on your face but your eyes and nose.  Anyway, I was hesitant to do this race. For the longest time I never did really well in the rankings. I decided to sign up for the race this time because one, I never get to see the ladies and two, I told myself just do it and don’t over think it.

As I walked up to the track, I could see that I had the first kart, #24. I grabbed a booster seat and plugged myself into the kart. As I settled in, I had a flush of mixed emotions that all happened at the same time. I was nervous, stressed, anxious, excited, scared, but finally ready. Why, do you ask? Well first off, we didn’t review the track.  Second, I had not raced in a long time.  Third, I could never fully grasp what I’m doing.  Lastly, the seating position didn’t feel right on my kart.  The worker walked up and to let us out and I thought, “oh well, here we go.”

As I pulled up to the checkered line I had to constantly remind myself “Just get the racing line down, speed will come second”.  The race started and off I went.  The first lap went alright, I felt like the other drivers were going to ramp up and easily blow right past me. I came up close to someone, and I soon realized it wasn’t a Drifting Pretty member because this girl was going pretty… slow and I laughed a bit. Sadly, it was a newbie that, well, had it coming. I didn’t want to be a jerk as I knew bumping could be disastrous and traumatic. As soon as I thought that, someone bumped my rear.  I looked over my shoulder and it felt like time slowed down.  Julie passed me and then she passed the newbie. As I watched how aggressive she passed me, I thought “Crap I need to push myself”.  We approached a turn and all three of us were neck and neck. The newbie was on the inside and got to the corner first, but that meant her racing line was bad and caused her to slow down.  Julie and I were into the corner too fast, but I was able to slow down in time.  However, Julie slammed on her brakes and spun out.  Luckily I saw that coming and dodged her.

I honestly felt good for the split moment but then I remembered I had to get back in line. I could see our current rankings being displayed on the wall as I came around the straightaway but reminded myself not to look.  Soon after, I ran into a group and did my best to fight my way through it.  I got sloppy and lost my focus. I was supposed to be trying to beat the others by time, not position. Julie caught up to me again and I tried to follow her, but she was sliding all over the place. “Too aggressive” I thought.

After another two laps, my kart decided to die and I totally lost my time. I situated myself into a new kart and noticed that my seating position was much better and the pedals were where I wanted them. The race started up again and I noticed that this kart was much faster. I rolled up behind Masashi and felt that he would be a have a good racing line that I could follow, but he wasn’t as aggressive as I thought he would be.  I lost my patience, so I spent the rest of the race trying to pass him.  I finally passed him but that was because it was the end of the race, haha!  Before we got to the front desk to look at the results I had to mentally prepare myself not to think much of what ranking I was and to not be discouraged as there is a lot to work on. Since the track was so small there’s just not enough time to plant the seed in the mind and let it bloom. We got our results, and I had mixed thoughts as I didn’t want to expect too much and didn’t want to put myself down since again, there is just so much to grasp. After that day, I feel like I should start practicing more.  It’s a start to something and it’ll definitely help to slowly focus on one aspect and build upon the rest. 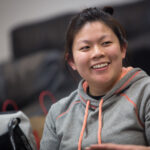 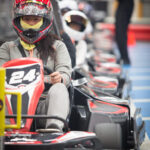